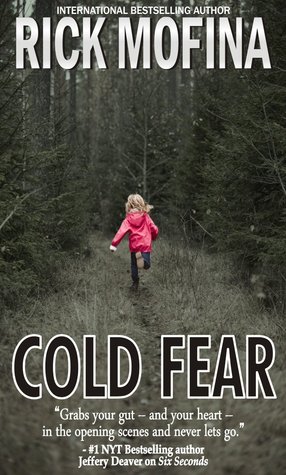 Cold Fear is a mystery/thriller surrounding the disappearance of ten-year-old Paige Baker and her beagle Kobee in the dangerous Glacier National Park. Paige’s parents, Doug and Emily, take Paige on a family trip to reconnect and allow Emily to bury her past, a past which comes to light in pieces throughout the story. When Paige disappears from their campsite, it is hours before either parent realizes she is gone and nearly twenty-four hours before they are able to get help in the search.

A search team is assembled, and a team of law enforcement and FBI also meets to ensure all angles of the disappearance are explored. Doug and Emily come under suspicion as their past is revealed along with recent events that paint them in a bad light. At the same time, death row inmate Isaiah Hood is facing down his execution date, and a link between him and Emily Baker is discovered.

Although the story is well written and interesting, with small bits of information planted throughout, it has some major drawbacks. The number of characters the reader has to follow is astounding. It feels like the reader is meeting new players right up until the very end, and each is given a detailed history. At times, it is difficult to follow each person’s position on the search team, with law enforcement, news agencies, and legal teams.

The major drawback is the information given about Paige. The opening scene of the book confused me for the entire story. The reader is shown exactly what happened with Paige, so throughout the entire book I questioned the reasoning for law enforcement’s involvement. Certainly there is reasonable suspicion of the parents, but given what we know of the actual disappearance, the reader knows in the end they are innocent regardless of any information that may suggest otherwise. Basically, as I read, I continually wondered what the point was.

The story also has quite a few errors, which are distracting. I expect much more in e-books these days. A good editor goes a long way.

At the end of the day, I did read the whole story and enjoy the plot. However I think it would have been a lot more effective if all of Paige’s scenes had been cut out and the reader was actually left wondering what happened right along with law enforcement and the journalists.