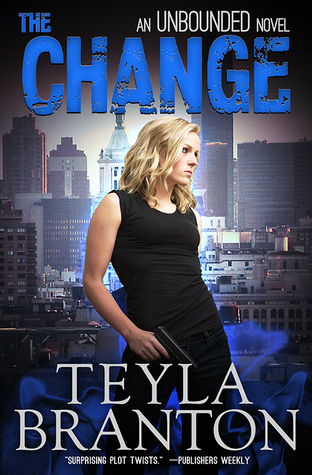 The Change is the action-packed supernatural story of Erin Radkey, who discovers she is part of a rare race called Unbounded. By a fluke of her genes, Erin and other Unbounded are near immortal. This “Change” doesn’t happen to many, and it usually doesn’t occur until the potential Unbounded is in their early thirties. After a fiery car accident should have left her dead, Erin finds herself very much alive, and in the protection of a group of Unbounded called Renegades.

Erin must decide which group of Unbounded her loyalty lies with, and she also must decide who she can trust. Her former best friend? Her almost fiancé? A fourth great-grandmother or her possible biological father? How about a Renegade who doesn’t stick around for long?

The Change is certainly intriguing and full of action. The concept of the Unbounded is interesting and makes for good battles when neither side is easily killed. Everyone has a talent, and it takes some time before Erin’s fully surfaces. When it does, it seems like a good idea for her to trust it, and she does so easily.

One of the drawbacks of this story is that everyone is quick to change sides based on a little discussion. And when they do, Erin is quick to believe them, which leads to disaster after disaster. As a reader, it’s difficult to trust anyone even when Erin “reads” them since she’s been fooled in the past. It also seems like no matter the danger, there’s time to stop for a discussion. It puts a bit of a damper on all the action when it’s interrupted by a chat about who’s a traitor and what they’re going to do next.

In addition to all of the action, there’s a bit of romance between Erin and Ritter, another Renegade. I wouldn’t call this story a romance, but it had enough to keep the reader longing for more of Ritter, even knowing he might not stick around.

The story held my interest from start to finish, and I would definitely read the next book in the series.