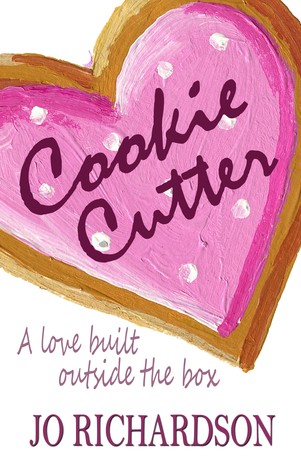 *I was gifted an ARC of Cookie Cutter in exchange for an honest review.*

It was tough for me to rate this book. I wanted to love it, but I just … didn’t.

Cookie Cutter is a contemporary romance about two people who are not looking for love but find it in each other. Iris is a recently divorced mom trying to juggle her way through each day with a teenage daughter. Carter is escaping his old life by flipping houses and ends up across the street from Iris. Their initial interactions are fueled with distaste for each other, but also a healthy dose of lust. Living in such a small town, they continue to cross paths, eventually settling on being friendly and then more.

Basically, I didn’t feel much of the change from annoying neighbors to more in either of them. Carter tries to be nice to Iris even as he’s telling himself not to. He enjoys pushing her buttons, and I really wasn’t convinced when that switch flipped in the relationship.

Cookie Cutter is written from both Iris and Carter’s points of view. There’s nothing specifically wrong with that, but my preference for reading in first person point of view is to stick with one person’s story. Although this story isn’t derailed too far by following both characters, I feel like it’s missing some of the buildup of the relationship by switching back and forth. The ending also felt somewhat out of left field because of the switching points of view. There’s also a decent amount of internal dialogue from both characters, which would have been better shown by their actions.

Editing issues … *sigh*. I contacted the author about the editing, and later found out that the ARC was created by mistake from an earlier draft of the story. I was actually nearly done reading when the author and publisher contacted me about the mistake and said they’d send a new copy. I held off on writing the review until I received the new copy, but it wasn’t much better. There were frequent places where hyphens or dashes were used in place of em dashes, commas in places where they didn’t belong and missing from where they did, inconsistent formatting, and sentence fragments for no reason. It was disappointing. The ARC did say editing was still taking place, but as a reader I expect an ARC to be in much better shape, with only minor changes needed before publication. The quality of the ARC didn’t leave me with much confidence that the final version would be any better.

I tried to discount the editing issues in my review thought process, but it was difficult to separate that out from the plot when I had trouble following the story because of the errors. Maybe that was why I didn’t really fall in love with Carter the way Iris did or have any good feelings toward Iris like Carter did. Throughout a good portion of the story, I thought she was a bitch to him and couldn’t really see what he saw in her.

The love scenes weren’t all that memorable, again probably because I didn’t really feel the buildup of the relationship. If it had been told in only Iris’ point of view and we had learned more about Carter as she did (instead of hearing things from Carter when Iris wasn’t around), I think the relationship would have been more believable.

In the end I went with two stars because the editing issues really overpowered any potential the plot had for me.