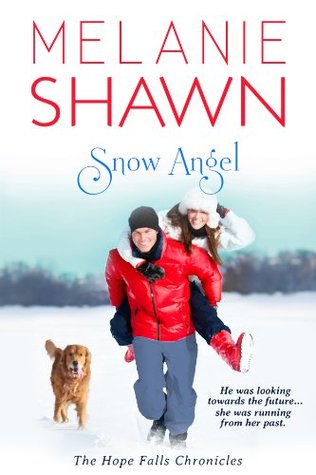 As the newly-appointed choreographer for pop star Karina Black’s upcoming tour, Lily Sotelo moves to the small town of Hope Falls. It’s a perfect move for Lily, who tries to keep a low profile due to her past in the witness protection program. Sexy police chief Eric Maguire is done with casual relationships. He wants more with the curvy choreographer who is now his neighbor. He knows Lily’s hiding something, but he’s willing to take whatever she’s willing to give him.

When Lily ends up in the tabloids next to Karina, her past comes back to haunt her. She needs to run once again and leave everyone and everything behind. But Eric isn’t willing to let her go so easily. He’ll fight for Lily and her love.

Snow Angel is the fifth book in the Hope Falls series and is meant to be a standalone novel. Although I was mostly able to follow along with the characters, it felt like I was missing a lot by not having read the previous novels. We get glimpses of Lily and Eric meeting at a wedding, but we don’t get much background information aside from that. Lily was at the wedding because she had provided dance lessons to the bridal party, yet the author never tells us how she came to be giving dance lessons so far from home in the first place. There was also a lot of forceful incorporation of secondary characters. Their inclusion didn’t feel natural.

The story was well written, and I enjoyed the main plot and loved Eric. He was strong, confident, and understanding, and he never gave up on Lily. I could feel the attraction between the main characters, and the UST was off the charts.

Other than that, the story moved too slowly for me. It felt like everything important happened in the last few chapters, and then it didn’t wrap up a few details. All along Lily was concerned about where she’d live once her job with Karina was over, and although the reader can assume she came back to Eric, I would have liked to know this for certain. Lily had been scared about putting herself on stage and dancing with Karina, so it would have been nice to know whether she actually went through with being one of Karina’s dancers or not.

Only a minor detail, but the title and cover didn’t really have anything to do with the story.

Overall, Snow Angel was a decent read but it could have been better.