Creatures of Appetite by Todd Travis 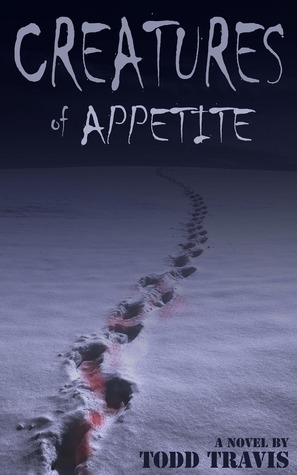 Special Agent Emma Kane is a new FBI profiler assigned to work the Heartland Child Murders case. Her partner, Jacob Thorne, has been pulled out of retirement to help catch the serial killer known as the Iceman, who is able to get in and out of locked houses to kidnap and murder little girls. Kane is known for her high close rate when she was a detective for the DC police, but her last case pushed her a bit too far. Thorne is arrogant, erratic, and brilliant, but anyone who gets in his way better watch out.

The pair gets a lot more than they bargained for when they fly to Nebraska to investigate. With more girls being snatched and snow storms bogging everything down, Kane and Thorne need to put a stop to the Iceman quickly. Lots of twists and turns and a surprising ending keep you on your toes!

Creatures of Appetite sucked me in from the first chapter. I love a good mystery, and this one didn’t disappoint. There was plenty of action and it certainly made for an interesting read. This wasn’t the kind of mystery that could be easily figured out until near the end, yet at the same time it wasn’t frustrating with a lack of clues. It just had enough twists to keep me turning page after page, right up to the end. Saying much more would give away too much of the story, and trust me, you’ll want to figure it out for yourself.

This easily could have been a five star story, but there were too many editing and formatting issues for me. The amount of run-on sentences was staggering. Caps were used for emphasis instead of italics. Internal thoughts were not italicized, which made them difficult to distinguish from narrative. There was a general lack of dialogue tags making the back and forth banter difficult to follow.

I read several reviews before purchasing the book that complained about the amount of cursing, but I didn’t find that to be problematic or unrealistic. It seemed on par with the typical portrayal of law enforcement.

Overall, I really enjoyed this book and would read more by this author, though I think he could use some better editing.