Vengeful in Love (Billionaires in Love Book 1) by Nadia Lee 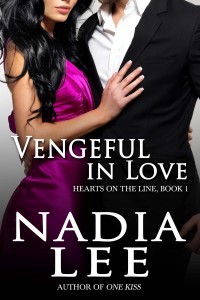 Natalie Hall has never really felt like part of her family. She was adopted as a baby, and her mother makes no secret of the fact that she prefers her child by blood, so Natalie just tries to stay out of the way. But Natalie has made a good living for herself, and she’s stunned when her company’s CEO takes a personal interest in her.

CEO Alex Damon has a chip on his shoulder thanks to having his own family ripped apart when he was a boy. He’s out for revenge, and he doesn’t care who he has to take down to get there. He takes an interest in Natalie due to her good looks, her brain, and also her family’s connection to his enemy. When his romance with Natalie truly blooms, he’ll need to decide if he believes she’s innocent in her family’s dealings or if she’s just another spy sent to ruin all he’s worked for.

Vengeful in Love is an intriguing tale with a strong heroine. Despite an initial attraction, Natalie doesn’t immediately fall all over herself to get into Alex’s bed. If anything, she’s resistant to the idea of any type of relationship with someone she works with. It’s a refreshing change from the multitude of stories where the female constantly drools all over the alpha male. Natalie has strong morals and is not easily swayed from them—not even when her Godmother and best male friend try to bribe her for help in saving their company.

One thing I didn’t particularly like about this story was how Alex never seemed to suspect anything of Natalie. He had plenty of reason to suspect her of being a spy for her family, but he maintained her innocence even when faced with evidence to the contrary. But then suddenly one day he believes it. I didn’t really buy the change of heart.

Overall, the story was well written and an enjoyable read. I would read more by this author.