Here is part two of the Cara Dee double feature. 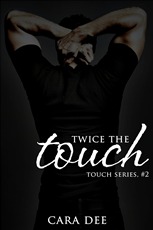 *I was gifted a copy of Twice the Touch by the author. I am not compensated for my honest opinion.*

One night at the club, Mark is asked to help out a couple who are new to the lifestyle. Their scene has gone from bad to worse when it becomes apparent that Brayden, acting as a Dom, doesn’t have a clue what he’s doing. When Mark takes over with Brayden and Evangeline, he finds more than he ever even though to look for.

Twice the Touch is a sexy novella you’ll want to read in one sitting, mostly because you won’t be able to put it down. It is book two in the Touch series. Although each novella in the series is a standalone, it makes most sense to read them in order as the stories continue from one book to the next. The main characters from book one have a small part in Twice the Touch, but I don’t think you need to have read Look but Don’t Touch to understand the story.

While Mark really wasn’t looking for any sort of attachment, he couldn’t help wanting to take Brayden and Evangeline under his wing and explore the lifestyle with them. I enjoyed reading about exploring their limits and how Mark quickly became attached to them.

Mark, Evangeline, and Brayden’s story doesn’t end with the completion of this novella, but it did come to a satisfying conclusion that didn’t leave me feeling like anything was missing. Of course, I’m excited to read the next installment, Touch to Surrender, to find out more about Brayden and continue on this journey with these characters.

Another five-star read from Cara Dee. All of my reviews of Cara’s work can be found under the Author Spotlight menu at the top of the page.