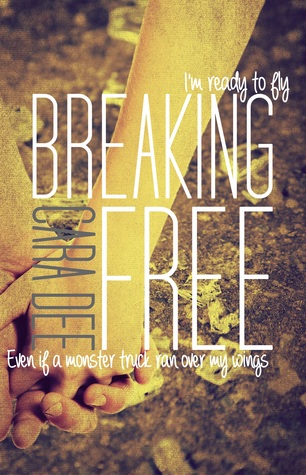 *I was provided a copy of Breaking Free by the author in exchange for an honest review. I am not compensated for my honest opinion.*

Hollywood director Tennyson Wright enjoys his solitude when he’s not working on a film. But in order to promote his latest project, he’s been instructed by the studio to put on a show of his own by dating party princess Sophie Pierce, who is seventeen years his junior.

Sophie Pierce is hoping her role in her current movie, directed by Tennyson, will help her break free from her party girl image and her father’s clutches, but she doesn’t quite realize just how bad her image has become. With help from her PA Daniel and her fake boyfriend Tennyson, Sophie will learn that she needs to fly on her own in order to make it in this world.

Throughout their “showmance,” Sophie and Tennyson develop true feelings for each other. But their differences run deep, and Sophie still has a lot of growing up to do. They’ll have to figure out what is real and what’s for show, and how Sophie can break free of her old image and prove she’s a serious actress.

Breaking Free is book one of two, so not all issues are wrapped up at the end of the story. Although I’m not usually a fan of this format, Cara Dee did not end Breaking Free with a major cliffhanger. The book stops at a natural breaking point, with the characters at a point in their lives where they have to live with the decisions they’ve made. The story definitely isn’t over, but you’ll be comfortable with where it ends.

The main focus in Breaking Free is on Sophie growing out of her party princess ways and learning how to handle life on her own, but that doesn’t mean there were no lessons for Tennyson to learn. He’s been happy in his life, until it’s pointed out to him that he’s not exactly approachable, and he begins to realize that perhaps his self-imposed seclusion is not doing him any favors. It’s been a while since he’s had a romantic relationship, so when feelings for Sophie develop, Tennyson isn’t quite sure what to do with them. Their differences seem insurmountable, but that doesn’t mean he doesn’t want to take her under his wing and protect her. Unfortunately, sometimes protecting someone also means letting them fly on their own.

I love watching Sophie’s transformation from self-centered, stuck-up party girl to responsible, dedicated actress. It’s no easy feat. Even once she begins to prove herself, she continually has to fight against her old image. And nothing can fully change overnight; it’s a recurrent learning process for Sophie. Cara Dee keeps things real. Problems and images don’t just go away, and differences are not overcome just because we want them to be. These characters have to fight for what they have.

Cara Dee has created another romantic masterpiece, and I can’t wait for book two, With Brave Wings, which will be released in August. If you enjoy realistic celebrity romances, you’ll love Breaking Free.