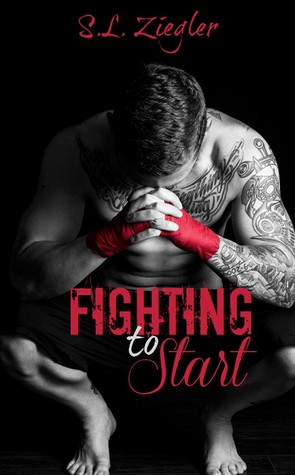 Twenty-one-year-old Hadley loves Reed “Riker” Collins madly, which is why she completely shuts down when he leaves her one day with nothing more than a note. Reed is an MMA fighter looking to make something of himself so he can be good enough for Hadley, his only love, a girl who grew up in privilege as opposed to his life of poverty. He promises to come back for her once he finds himself, hoping she’ll also follow her dreams instead of giving everything up to follow him.

Unfortunately, Reed’s good intentions don’t work out like he planned. Although he’s made a name for himself and plenty of money, both his life and Hadley’s have been practically destroyed in the process. Reed will fight to get her back, but Hadley isn’t sure there’s anything left worth saving.

Fighting to Start is book one in the Fighting Madly series, and the story doesn’t end with a happily ever after. It’s not a cliffhanger ending, but there is clearly more to the story between Hadley and Reed. While Fighting to Start is definitely in the romance genre, I’d call it more of a relationship story. It starts with the main characters madly in love with each other, but very quickly Reed makes the decision to leave Hadley for her own good, and the two live their lives separately for about five years. We hear about what each of them is up to during that time and the bits of information they get about each other, which spurs on the choices they make. Eventually the two arcs come back together, but there’s no immediate happy reunion. Even once they do reunite romantically, the story is not over since both characters are hiding information about their past from the other.

This is where things got a little too cliché for my liking. Reed and Hadley agreed to discuss the past one time and then put it behind them, but neither of them did that. They both kept secrets, and when those secrets came out neither of them were able to just move on from it. I didn’t understand the ending of how Hadley could suddenly decide she couldn’t be in a relationship with Reed because of something that had happened while they were apart when they made that agreement in the first place.

Let me discuss the stupid choices they each made. To start with, Reed left Hadley for her own good without giving her perspective any consideration. That was the entire premise of the story, and it annoyed me from the get-go. While they were apart, he was so broken up over not being with her that he went out and slept with other women—lots of other women. Meanwhile, Hadley complained about how much of a pig Bennett was and an hour later she decided he was perfect for her. Once his true nature came out, she admitted he was a monster but never entertained the idea of leaving him.

Then there was the unrealistic. Reed’s father died quickly and without warning, yet somehow he managed to write a letter to Reed that said how long ago Hadley had contacted him, which meant he had written the letter right before he died somehow knowing he was going to die. Hadley’s mother made a long-winded speech on her deathbed while she was in pain but holding off on getting pain meds. Reed and Hadley got back together and had sex the night Hadley’s mother died. Then everything between them was magically okay after that. Reed’s training only ever consisted of using punching bags, even though he was a master of mixed martial arts. The story ends with Hadley in a coma, but the epilogue jumps to her going home and being strong enough to leave Reed.

And then there were the editing mistakes. The dialogue was unnatural. There were tense changes, lots of run-on sentences, missing words, words out of order, and incorrect word usage—rose “pedals” instead of “petals,” “heal” instead of the “heel” of a shoe, another “thing” coming instead of another “think” coming. Hadley talks about storm counting with her mom when she was younger, but she got the process wrong, saying they counted from thunder to lightning when it should have been counting from lightning to thunder. At one point, Reed was on the phone with someone, yet he told us he watched the guy shake his head. In the epilogue, Hadley said she hasn’t said a word to Reed since she left the hospital, but she had just had dialogue a few paragraphs prior.

Overall, this story wasn’t very enjoyable for me with so much of it being cliché, unrealistic, and poorly edited. I would not be interested in reading more of the series.