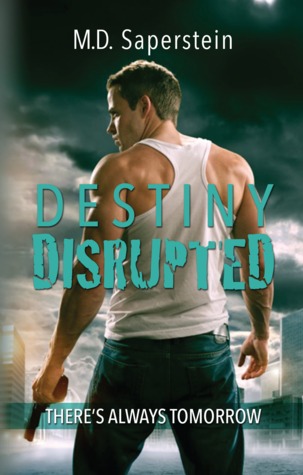 *I was provided a copy of Destiny Disrupted by the author in exchange for an honest review. I am not compensated for my honest opinion.*

Vance Summers has faced a lot of disturbing scenes in his years on the job as a homicide detective, but the latest string of gruesome murders has him questioning his ability to do the job. Being on the highway behind Melina Higgins when her car is overcome by metal rods falling from a truck feels like kismet. Vance finds himself drawn to Melina as she recovers from her injuries.

Melina is hesitant to date a man whose job will always come first, but her attraction to Vance is undeniable. When Vance’s job becomes personal and the serial killer goes after those he loves most, Vance, Melina, and all their friends will need to band together and fight against the threat.

Destiny Disrupted is a suspenseful romance detailing the lives and relationships of Detective Vance Summers and all his friends. The suspense surrounds the case of a serial killer that turns personal when Vance begins to receive messages pointing to the fact the killer knows him. When he comes home to find all of his roommates injured and one person left dead, Vance is finally able to put the pieces together and figure out who the killer is. But they still have to catch him.

The story unfortunately had many issues between the writing, lack of relationship buildup, the plot itself, and most importantly the ending. Written in third person point of view, it seemed like we heard from almost every character at one point or another, and truly only Vance’s point of view fit in with the ending of the story. The writing was simplistic and at times naïve. While in Melina’s point of view, Vance called 911 to report the car accident, and within his dialogue the author spelled out in parentheses what the police codes meant. We were introduced to a lot of characters and their relationships to each other in the beginning of the book, giving the feeling of cramming for a test rather than natural incorporation into the story.

Regarding the relationship between Vance and Melina, all of the details of them getting to know each other were skipped over. The focus was on the sexual encounters, leaving no chance for the reader to become invested in the relationship. The relationships between other characters were even worse, feeling like they were thrown in within Vance and Melina’s story with a chapter here and there in someone else’s point of view.

There were several issues with the plot that drew away from the overall enjoyment. To start with, Melina was in a car accident, bleeding with a pipe stuck through her thigh, yet all she could think about was how gorgeous Vance was. Her recovery and immediate return to dancing weren’t realistic for the type of injury she suffered. The ages and jobs of each of the men didn’t fit. For example, Vance was twenty-eight and had been a homicide detective for eight years. His little brother was twenty-one, yet he was still “best friends” with Vance and all of his friends. And Ryder, one of Vance’s best friends, had been attracted to Vance’s little brother for a long time. I couldn’t figure out how old Vance’s younger sister was supposed to be as she was married with two children, the oldest of whom was seven.

Another issue was with the way some information felt forced into the story, as if the author wanted to focus on the sexual aspect of the characters’ lives rather than their emotional and personal issues. Several times, it was mentioned that one or another of the guys slept naked, and none of them had any problem with others barging into their room like that. There was also a scene with Vance and one of his friends jerking off to porn together that was entirely unnecessary. The portions told from other characters’ points of view included a sexual scene between two men, which again felt like it wasn’t necessary, as well as sexual scenes with Vance’s other roommates.

Spoiler Alert: The ending of the story really pushed me over the edge for how much I disliked this book. After all of these other characters had their say, many scenes not including Vance, we found out the entire story was some kind of a dream and Vance had never even met anyone named Melina.

This book unfortunately wasn’t worth the time it took to read it.