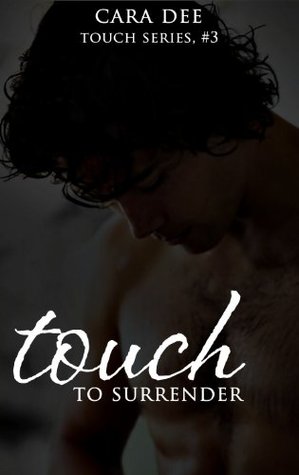 *I was provided a copy of Touch to Surrender by the author. I am not compensated for my honest opinion.*

Brayden and his girlfriend Evangeline have embarked on a Master/sub/sub relationship with Master Cooper, which works out well for everyone. Mark, their Master, enjoys having two subs, even if he’d like to take his non-sexual relationship with Brayden further. Brayden can’t bring himself to admit out loud that he’s bisexual, and he certainly isn’t able to act on it after his father drilled into his head how wrong it is.

But Master’s job is to push limits, including Brayden’s. After watching a homosexual scene between another Master and his sub, Brayden gives a little. When he winds up alone in bed with Mark, Brayden’s barriers break down, and he’s finally able to give in to what he really wants.

In this book, we get inside the head of a male sub who is having difficulty acknowledging his bisexuality. He wants Mark’s touch, and even wants to touch Mark in return, but feels like it’s wrong to give in to that because of his father’s beliefs. I loved how Mark showed Brayden—and Evangeline—that it was okay for two men to be together. In the context of a BDSM scene, Mark brought in another Master and sub, both men, who also happened to be married. Brayden had no choice but to watch because his Master ordered him to, and then he also had no choice but to admit there was nothing wrong with what the two men in front of him were doing.

Cara Dee has a way of always keeping things realistic. Brayden didn’t just forget what he’d been taught because of the scene he watched. We got to see his true struggle the following morning when he was alone in bed with Mark. He continued to fight his natural urges until he couldn’t take it any longer. Mark’s openness about what he wanted from Brayden pushed him gently, as only a Master could do, resulting in a happy Master and sub, as well as quite a hot read for the reader.

I have yet to find a work by Cara Dee I didn’t love, regardless of the genre, even if it wasn’t something I’d typically read. Touch to Surrender was no different. I look forward to reading the rest of the Touch Series. All of my reviews of Ms. Dee’s books can be found under the Author Spotlight tab.