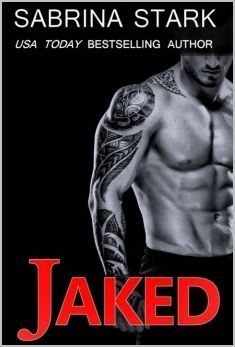 *I was gifted a copy of Jaked by the author. I am not compensated for my honest opinion.*

Luna Moon has been in love with Jake Bishop since she was twelve and he saved her from some bad boys. She hasn’t seen him since she was seventeen and he blew her off. Now that she’s all grown up and totally over him, Jake walks back into her life and takes it over. Luna’s gotten herself into some trouble, and she doesn’t even realize it. But Jake wants to keep her safe. She’ll need to keep her wits about her if she wants to remain friendly with the now wealthy Jake without losing her heart in the process.

Jaked was an interesting contemporary romance. It’s a second chance romance since the hero and heroine knew each other when they were younger, and Luna has always been in love with Jake. Now that she’s older and wiser, she is trying her best to resist Jake’s charms because she knows he brings a world of trouble with him.

Jake was always a bad boy, but now he’s turned that bad boy image into a way to make a ton of money. I enjoyed trying to put the pieces of Jake’s life together with Luna as she tried to figure out exactly what it was Jake did for a living. The story had tons of amusing sarcasm and interesting characters, but since Jake had a habit of never giving a straight answer—or in most cases never giving any answer—it was difficult to determine who was telling the truth and exactly what Jake’s intentions were. I didn’t blame Luna for questioning why he was really with her.

Although Jake was a known player, I liked that this wasn’t a typical romance where he immediately changes his ways and goes after the heroine. He actually understands he’s no good for her and does his best to make her see that.

The author’s writing style was different and somewhat enjoyable. Most chapters were short, and they were heavy on dialogue with a lot of back and forth discussion between the characters without feeling like they were ever making progress, although that was mostly because Jake continually dodged every question thrown at him. Unfortunately, the story was missing a bit of character development due to the dialogue-heavy style. There was plenty of description of Jake’s body, but I honestly couldn’t remember if the author ever even told us the color of his hair.

There were some minor editing issues like missing or extra words or incorrect punctuation, but they didn’t take too much away from the plot. The story is continued in the next book, Jake Me, which the author was also kind enough to gift to me. Overall, I did enjoy the story since it was so different from most other romances out there today.