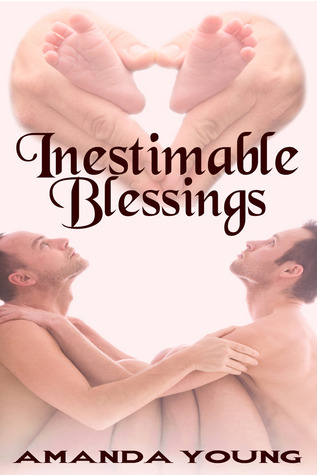 Lee Calder knows what he wants out of life. He has a wonderful career as a physical therapist and a baby on the way via surrogate. The only thing missing is someone to share his blessings with him, but he’s okay with that as long as he gets to be a father. He’ll keep daydreaming about his hunky neighbor Finn while he enjoys life.

Literally stumbling onto his neighbor and finding out the other man is also gay is quite a surprise. While their attraction grows, Lee has to find a way to tell Finn he’s about to become a daddy without scaring Finn off.

Inestimable Blessings is a M/M contemporary romance about finding love when you least expect it. While Lee was happy to raise his child alone, finding someone to share his family with would be the icing on the cake. Finn also wasn’t looking for love after being burned by his ex. And he certainly wasn’t looking for a ready-made family.

Although I loved the premise of this book and enjoy family-centered romance, there were a few things that missed the mark for me. Lee was quick to anticipate the problem of Finn rejecting him because of his impeding fatherhood when Finn had given no indication he wouldn’t be receptive to the idea. It felt like the author was telling us what the issue would be instead of building up to something. The summary also misled me to believe there would be some big rescue between the two men when in actuality it was nothing like that. There was also a bit of unnecessary cliché.

I found the dialogue somewhat awkward as well as editing and formatting issues. There were some inconsistencies, like telling us that the surrogate had four children but later saying she had two. Several chapter breaks were missing, and there was some random highlighting in the electronic version. A professional editor and formatter would have made a world of difference in this book. These days, there are so many choices that it’s not worth it to read something that’s not professionally done.