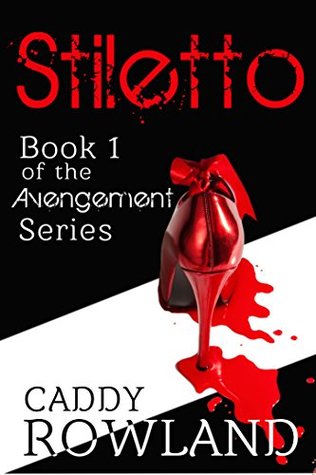 *I was gifted a copy of Stiletto by the author. I am not compensated for my honest opinion.*

Jasmine Albertson has become used to a life of luxury thanks to her husband Stu’s money, but when his business is investigated for participating in a Ponzi scheme, she loses everything—the money, their house, Stu’s life, and even the baby she is carrying. Stu’s partner, John Mickelson, set everything up so Stu would take the fall and John would escape free and clear. Except Jasmine knows her husband was innocent, and if the law won’t punish John, she will.

Once all of her assets are gone, Jasmine is determined to build herself back up and put an end to John Mickelson no matter how long it takes. Her plan takes shape while chatting with her fellow exotic dancers—a job she had to go back to in order to make good money fast—and she is gifted a beautiful pair of shoes. But the shoes are more than just beautiful; they’re also deadly. And Jasmine knows exactly how she will put them to use.

Stiletto is a suspense thriller novel with very little actual suspense. Right off the bat, the reader knows Jasmine plans to rid the world of John Mickelson, and thanks to the prologue, we also are given a pretty good idea of how she will do it. Sure, some of the details are not revealed until later, but by that point in the book I didn’t really care. Nothing about this book drew me in or kept me engaged. The scenes were very simple and jumped around, and there wasn’t any character development.

This story had way too much “telling” instead of “showing,” and there was very little action when dialogue was involved. The dialogue felt unnatural and awkward. The plot was also unrealistic. Jasmine’s plan required her to become someone else and seduce John, but John and Stu had been best friends yet we were supposed to believe a blonde wig and blue contacts would mean John wouldn’t recognize his best friend’s wife of three years. The story included Jasmine’s best friend Tory, and his sub-plot was also not realistic. When Jasmine moved back to NYC, Tory was in the beginning stages of a relationship with a man named Brady. After three years of living and working in NYC, Jasmine somehow dodged any attempt of meeting Brady, and Tory and Brady’s relationship hadn’t progressed beyond the insecurity stage.

Both Jasmine and John were extremely cocky. Jasmine was somehow able to predict every one of John’s thoughts regarding her sex appeal and how much he would want her, plotting out exactly what he would do or say in her head before it happened. John’s character drove me crazy with how often he declared that Jasmine’s alter-ego Grace would want him sexually and want to come back for more once she had him.

The book was written in third person point of view, and at times the points of view were mixed together. There was also a random point of view from a club owner thrown in that had no reason to be there. The inclusion of Tory’s point of view was one more piece we didn’t need since he was also able to guess what Jasmine was up to. All of this combined for a lot of unnecessary repetition. The story would have been much better served by sticking to Jasmine’s point of view and adding more action. By the time Jasmine was ready to bait John into her plan, I was bored with the book and ready to move on. There was no mystery, and the suspense was minimal. With all of John’s cockiness, he accepted why Jasmine was going to kill him too easily, leaving the reader with an anticlimactic scene.

There were also some editing issues, like missing and extra words and missing punctuation. Overall, I found this book difficult to finish and almost put it down several times.