Public Display of Everything by Cara Dee 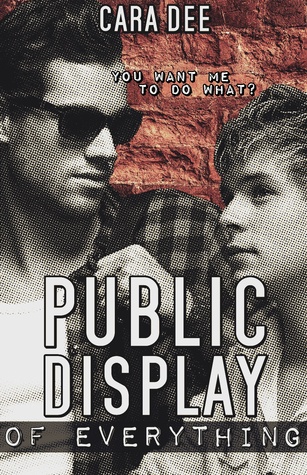 Cory Matthews can’t keep a job and is just barely keeping his head above water living in hostels in London. When he’s approached in his favorite pub by a nervous younger man offering him a job, Cory has no choice but to hear the man out. Flynn Wright runs a successful website for voyeurs, and his members have been begging for the chance to see Flynn in action. But Flynn doesn’t think he’s appealing enough to satisfy his members, so he wants to hire Cory to pose as his body double. As desperate as Cory is for money, he accepts Flynn’s offer—to masturbate in a location where the members will be able to watch.

Cory’s attraction to the quirky younger man only grows as they spend more time together and become friends. But he’s been burned before and is afraid to put himself out there. All he wants is to be able to be himself and not be judged for it. When he finally expresses his intentions, Flynn is more receptive than expected. Both men have some demons in their past to work out before they can truly be happy. Leaning on each other might be just the thing they need.

Public Display of Everything is a wonderful male/male romance that will have you falling in love right along with Cory and Flynn. Neither man is unsure of their sexuality, yet they both have issues to deal with and show growth throughout the story. I loved the format of the book, which began most chapters with a message from an unknown person to Cory. It gave hints to Cory’s past, but I was surprised by the revelation of who the messages were from and what the issue was.

Flynn is so adorable you’ll want to keep him for yourself. He’s quirky and nerdy, and he’s extremely unsure of himself at the start of the book. Watching him become more confident throughout the story was so satisfying. I loved when he apologized for cursing but then cursed even more, and also how his expressive vocabulary continued even in the height of passion. Flynn knew his social skills were lacking, and every time he looked up how to handle a situation on the internet, I fell in love with him even more. By the end of the book, his confidence had grown by leaps and bounds.

Even though Cory was a confident character right from the start of the story, there were still some things that brought out his insecurity, like the fact that he was a klutz and could make a mess of the simplest situation. His protectiveness of Flynn was sexy without going overboard. But Cory also had to learn there was a difference between showing off his sexual orientation just because he could and actually being comfortable with who he was and who he loved.

I loved this story from start to finish, and would definitely recommend it to fans of male/male romance. I’ve reviewed several other books by Cara Dee, and all reviews can be found under the Author Spotlight tab.