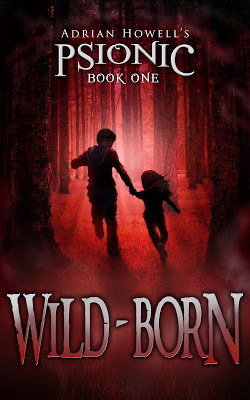 At twelve years old, Adrian Howell discovers he has telekinetic powers. He can move things with his mind and blast holes in stuff. But what starts as a fun way to entertain himself and his younger sister turns into a curse when his family is attacked and warring psionic factions want Adrian and his powers for their own.

Not knowing who to trust, Adrian spends time on his own before being found by another wild-born psionic and taken into her family. There he meets Alia, a wild-born healer who can speak directly into people’s minds and who becomes like a little sister to him. Adrian doesn’t give up on finding his real sister though, and he and Alia wind up in a lot more trouble than they bargained for. He’ll need to keep his promise to protect Alia while also finding a way to save them both.

Wild-born is a thrilling young adult paranormal fantasy that had me glued to my seat. Although it is book one in a series, it is a complete story on its own that will compel you to read the next book. I quickly became attached to the main characters and look forward to reading more about their lives.

The story is definitely geared toward the young teen audience, but that doesn’t mean adults won’t appreciate it also. The main character is only twelve at the start of the book, and I enjoyed watching him feel his way through situations he had no experience with. Several times he got himself into trouble by just being the kid that he was, but he realized his mistakes and was able to learn from them like any kid should. The problem was that Adrian’s world was more life-threatening than most kids’, resulting in more dangerous situations.

The various powers exhibited by the characters were interesting, and I loved learning about the psionic world along with Adrian. Watching him piece together the way each power could be used in the situation he was stuck in was fascinating.

The dialogue felt a bit stiff sometimes with repetition of the name of the character being spoken to, but overall this was a minor issue in an otherwise great story.

I read this book along with my middle school-aged child, and we both truly enjoyed it and are looking forward to reading more of the series.