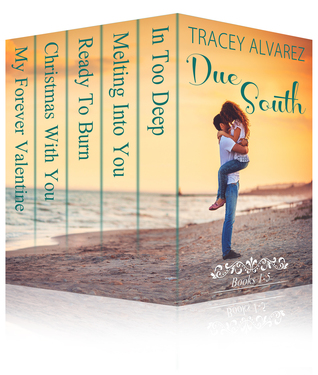 *I was provided a copy of Ready To Burn and Christmas With You by the author in exchange for honest reviews. I am not compensated for my honest opinion. I have read and reviewed 4 out of 5 books in this set. Full individual reviews can be found by selecting Tracey Alvarez from the Author Spotlight tab.*

In Too Deep (Piper and West)

In Too Deep was a flirty, fun, sexy read. Both main characters were stubborn, but they way the author had them butting heads was entertaining. Just when I thought it was starting to get old, they both gave in to the UST and allowed the fireworks to soar. That wasn’t the end of their banter though. It continued even during the intimate scenes, but it was appropriate for the characters as they were written and amusing for the reader.

The story was much more than a romance though. Piper had to let go of her guilt over her father’s death, and she also had to mend fences with her family. West had been holding on to a grudge thanks to his mother leaving him years ago that rendered him incapable of being happy in a relationship. All of these plot lines were tied together nicely with secondary characters who added depth and meaning to the story. There were a few instances of Piper’s brother’s point of view, but they were integral to the plot and not just there to get the reader interested in the next book (although I’ll add they did that anyway!).

I also enjoyed the way the author provided information on diving in a way any reader could understand. It was not too technical yet not too dumbed down.

In Too Deep is a must read for contemporary romance fans.

Melting Into You (Ben and Kezia)

Melting Into You is a standalone novel that is part of the Due South series. Even though it can be read without reading any of the other books, you’ll want to read them all. Tracey Alvarez has a way of drawing the reader in to the lives of all of her characters, including the secondary characters in each story. The stories fit seamlessly together, but enough background information is provided in each book so you won’t be left behind if you haven’t read the others.

As usual, the main characters in this story show amazing growth throughout the tale. Ben is completely clueless about what to do with his daughter at the beginning of the story, to the point where he’s literally counting down the hours until she’s supposed to leave. With a little push from Kezia in the right direction, he falls in love with Jade without meaning to. The scene where he begs Marci not to take Jade away before he gets back to Oban will tear your heart to pieces.

Kezia, while sweet, loving, and a wonderful mother, is set on doing things on her own and not depending on another man after her relationship with her deceased husband fell apart. Even when Ben finally proves that he wants to be there for her—changing his commitment-phobia ways—she’s unwilling to accept his help. It takes a good talking-to from one of Ben’s sisters for her to see how pig-headed she’s been, but once her eyes are opened you’ll be cheering right along with their daughters for them to become a family.

There’s even character growth in Ben’s daughter Jade, who goes from shy and thinking poorly of herself to a happy, outgoing, strong girl. It’s wonderful to see her open up to Ben, call him Dad for the first time, and even stand up for herself.

The romance in Melting Into You is perfectly intertwined with Ben’s family growth, giving the reader more to focus on than just the growing attraction between Ben and Kezia. Tracey Alvarez has knocked another one out of the park with this five-star must read. She has quickly moved to one of the top spots on my favorite contemporary romance authors list.

Ready To Burn (Shaye and Del)

Ready To Burn is book three in the Due South series, but like the others, it can be read as a standalone. Also like the others, you’ll enjoy it so much you’ll want to read the rest of the series. Each book incorporates the characters and storylines from the previous novels and provides enough information on the secondary characters to intrigue you to read their stories. This book is about Shaye, the youngest Harland, and her continued quest to become head chef, as well as Del, the forgotten Westlake son’s issues with his family and everything he’s gone through in the years since he left Oban.

Both main characters have a lot of growing to do in this story. Shaye has an unrealistic idea of what she’s searching for in Mr. Right, and she learns through friends and family that even though you sometimes may want to kill your significant other, what’s really important is the love you share and that you’ll still only want to share it with that person. Del has a lot of hatred for his father since he thinks his father sent him away. In reality, his father did what needed to be done for Del and his mother to be happy, giving up his own happiness in exchange for theirs. Del finds out that when it comes down to it, your family has your back even when it doesn’t seem like it. Although Del dreams of a career as a famous chef, he realizes there’s more to life than fame and fortune. He’s also surprised when his family supports him with no questions asked when they find out about his drinking problem.

As always, Ms. Alvarez starts the romance off with fireworks of a different kind. Shaye and Del butt heads immediately and frequently, but that switch is flipped at just the right moment, when the characters give in to temptation and begin to see more in each other. There’s plenty more to the story than just the hot sex though. Family drama is an ongoing theme, with both Shaye and Del struggling to find their place in their family and learning who they can depend on. I always love when there’s more to the plot than just romance, and Ready To Burn delivers in spades.

Shaye has always been the good girl in her family, and watching her characterization unfold is so amusing. She keeps a swear jar in the kitchen of Due South, and all the money collected goes to charity. Even in her head, her curses are adorably innocent. Del’s foul mouth contrasts nicely, and the two are like yin and yang, opposites fitting together perfectly.

Any contemporary romance fan who enjoys a solid plot with family drama will love Ready To Burn, along with the other books in the series.

Christmas With You (Carly and Kip)

Having read several of Ms. Alvarez’s books, I knew I could count on her to provide a well written contemporary romance with a happy ending. Christmas With You didn’t disappoint in this aspect. Although this one is novella length, it still provided all of the aspects that make a good romance. There was attraction between the main characters with a good pace to the developing relationship, but there was also more to the plot than just romance. Both of the main characters had family issues to resolve before they could be truly happy with themselves and their relationship.

The Due South series to this point has encompassed mostly the people who lived on Stewart Island or were coming home to the island. One thing I loved about this book was that both main characters were outsiders, but still able to call the island home. Kip moved away from home two years prior and ended up as a bartender in Oban. Carly no longer had much of a home in the US after her father passed away and her stepbrother and stepmother moved to Oban, so she followed them in order to have some family. Yet both Kip and Carly felt a connection to the island—whether through family or a sense of fitting in—making their story feel like a cohesive part of the series. All of the books in the series are standalone, but you’ll get the best reading experience by reading them in order.

The main characters were both likeable people, and Ms. Alvarez did a great job of bringing the heat between them. Their first sexual encounter practically sizzled off the page. I loved that Kip had an undeserved reputation for being a player. Instead of using the contrived player-turned-relationship guy, Kip was truly a one-woman kind of man who didn’t let his lust for Carly get in the way of creating a meaningful relationship with her. But don’t count him out as a hot alpha male. Bossy Kip was an incredible turn-on!

Romance fans who enjoy a little more to the plot will love this book.