Playing For Fun (Due South Book 6) by Tracey Alvarez 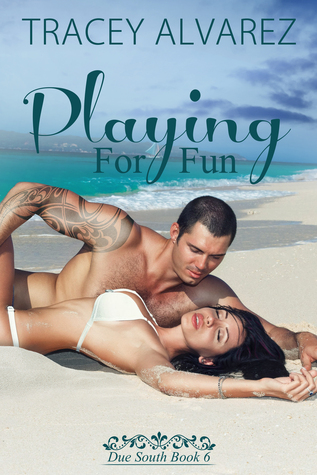 *I was provided a copy of Playing For Fun by the author in exchange for an honest review. I am not compensated for my honest opinion.*

Holly Parker finally lands her dream job, but there’s a catch. In order to finally work full-time as a hairdresser, she’ll have to leave her home, her friends, and her budding relationship with best mate Ford. Her feelings for Ford have taken a dip outside the friendzone lately, but when Ford appears to want to look for companionship outside Stewart Island, Holly offers to lend a helping hand instead of speaking up for what she wants.

Ford Komeke can’t deny he needs a little help in the dating arena. He has no idea how to talk to women, and he certainly doesn’t want to open up about his past. But then there’s Holly, his best friend, and maybe something more? He can’t deny his feelings for her any longer. Too bad Holly’s leaving and doesn’t want anything more serious than a casual fling before she goes.

Just when Ford and Holly finally admit their feelings for each other run deeper than friendship, Ford is sent into a tailspin by ghosts of his childhood. Locking his feelings away seems to be the best way to go, but Holly won’t accept that he won’t open up to her. Ford will need to make peace with his past before it’s too late for his future.

Playing For Fun is the sixth book in the Due South series, and although it’s a standalone novel, it’s best enjoyed after reading the others in the series. Each book in the series focuses on different residents and visitors to Stewart Island, but the cast of characters is the same and some of the story lines flow through the books. Each book is enjoyable in its own right, and I loved watching Holly and Ford’s friendship turn into a love story. As always with Ms. Alvarez’s stories, there’s more to the plot than just romance. This story includes both Holly and Ford being held back from happiness in the present by issues from their pasts.

I was enamored with Ford from the start. He was nowhere near the overdone typical alpha male. Instead, he was “that laidback Maori fella,” a sweetheart and good guy who everyone loved. Ford loved to joke around, work on cars, and play his guitar. And really, what could be sexier? Ford also was able to recognize his own weakness: talking to women and getting dates. And with that, he welcomed the offer of help in finding a match. The only problem was that the one person he truly wanted already seemed closed-off to the idea of a relationship with him.

Holly was outwardly confident, but her biggest issue was in asking for what she wanted. Instead, she’d settle for what she was given. So when a full-time job opened up and was offered to her, she felt she had to take it because that’s what she’d worked all these years for, right? Not to mention how she was too shy to ask Ford for what she wanted from him. Both Holly and Ford grew individually throughout the story, and of course there was plenty of growth for them as a couple.

I can’t neglect to mention the heat between Holly and Ford. Ms. Alvarez has a way of stoking the fires and fanning the flames of her characters without going overboard or writing gratuitous scenes. I loved watching the sparks explode, but also seeing how Ford was always in control. He knew things could easily get out of hand and chose to slow them down for the sake of his relationship with Holly. And through all their ups and downs, Holly and Ford never lost their friendship, even if it dialed back for a time.

I thoroughly enjoyed this installment in the Due South series and look forward to reading more in the series and more from this author.

All of my reviews of Ms. Alvarez’s work can be found by selecting her name from the Author Spotlight tab.