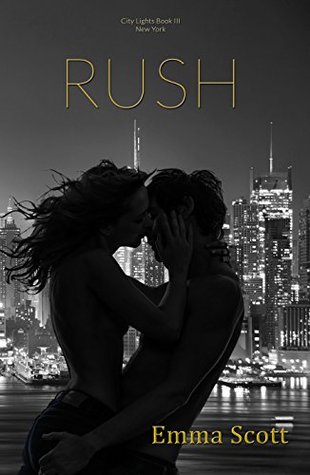 *I was provided a copy of RUSH by the author in exchange for an honest review. I am not compensated for my honest opinion.*

Julliard-trained violinist Charlotte Conroy has everything she ever dreamed of before tragedy strikes and takes it all away. She no longer feels the music and must accept a job as a personal assistant to a blind man in order to pay the bills. Noah Lake travels the world as an extreme sports athlete, journalist, and photographer until an accident steals his vision and leaves him in his own personal hell. He becomes a shell of the man he once was, angry at the world and pushing everyone away.

Charlotte knows working for Noah won’t be easy, but she’s determined to show him his life isn’t over. And Noah won’t let Charlotte close up her violin case just yet. They each have to face their own personal struggles in order to find happiness together.

RUSH is a remarkable new adult romance about two people who have to help each other find their joy in life again. Right from the prologue, I was hooked on this book and the author’s writing, not wanting to put it down until the very end. The story was an emotional journey for both main characters, as both Noah and Charlotte had difficulty facing their future in light of their past.

Both characters were well-developed. Charlotte may have had her heart crushed, but not her spirit, and that showed in her every interaction with Noah. As mean as he was to her at times, she never forgot he was mad at the world and his circumstances, not at her. But she’d lost her love for music, and just when she was finding joy in life again, she had to make a decision that meant either giving up the music or giving up Noah.

Although he survived a cliff-diving accident and a coma, Noah felt his life was over and wasn’t interested in learning to live as a blind man. He was bitter and angry because he would never be able to do the things he loved again. And then Charlotte entered his life, and she wouldn’t back down or let him live in the dark any longer. Little by little she chipped away at his hard shell until Noah found that there was still something worth living for. I cried several times throughout the book as Charlotte helped Noah begin his new life.

As much as I loved the plot and the writing, there were a few things that could have been more developed, like Noah’s scars and his movements when he would kiss Charlotte. His injuries were described as gruesome, but at times the scars were forgotten instead of incorporated into a scene. Sometimes, the way Noah moved didn’t feel realistic for a man still learning to live without his vision.

Overall, these few drawbacks did not ruin the story for me. It was still a wonderfully emotional journey, and I would definitely read more by this author.