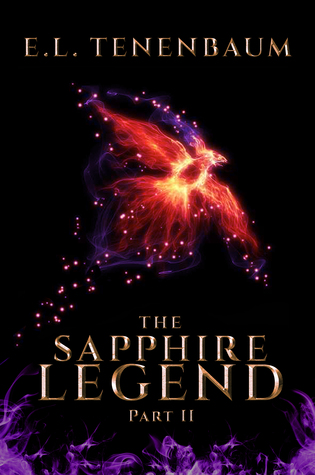 *I was provided a copy of The Sapphire Legend: Part II by the author in exchange for an honest review. I am not compensated for my honest opinion.*

Sapere and the surviving villagers of her tribe have been in the Wild for months, and many of them have adjusted to life there. When Sapere and Venatore find the fifth tribe, they have an obligation to warn them of an impending attack by the Pliz. Their sister tribe also has an obligation to offer asylum to the survivors.

But life in the tribe by The Great Waters is vastly different than what Sapere is used to. Her tribe was just beginning to accept her differences—that she was given her family’s gifts, which are only passed down to males—and her place on council. Now she has to prove herself all over again, and she has to do it while her instincts are telling her they are woefully unprepared for an attack by the Pliz.

The Sapphire Legend: Part II is a young adult fantasy about a young woman who has to prove her worth to the rest of her people while discovering her value for herself. Because of the gifts she was born with, Sapere had to fight for her place among her people in part one. Even after all she did to save her tribe, she is once again an outsider who has to gain respect among the new tribe.

The story drew me in immediately, picking up right where part one left off, with Sapere and Venatore discovering the fifth tribe. They needed to develop allies in order to convince the rest of council to journey to the other tribe by The Great Waters, but once they arrived their quest had only begun. While some settled easily into life with the fifth tribe, others, like Sapere, weren’t comfortable with the differences in the way they lived. These differences made it even more difficult for Sapere to be accepted among council.

The author’s description of Sapere’s gifts was exquisitely written, making me feel like I was picking through sounds and feeling the heartbeat of the earth right along with Sapere. I enjoyed watching how she struggled to grow her gifts and teach others, as well as her indecision when she needed to use them with less-than-honorable intentions.

Sapere’s growth was not limited to her own self-worth. Throughout the story, her relationship with her older sister Onyx also grew and changed. Where Sapere once looked up to Onyx, their roles were suddenly reversed and she came to realize she now had Onyx’s admiration. Once Sapere settled her own personal battle with the Pliz’s attack, she was also able to move on and accept Reo’s feelings for her. The romance in this story was secondary to the main character growth but a well-rounded addition.

The entire story contained a general feeling that something was going to go wrong, that something wasn’t right with the new tribe. There was good buildup to the battle, and good timing of Sapere’s recognition of Reo’s love.

I truly enjoyed this book as the conclusion of what began in book one. Ms. Tenenbaum’s talent for drawing a reader in and holding them captive assures great things in her future.