Chef (My Master Series Book One) by D.S. Hart 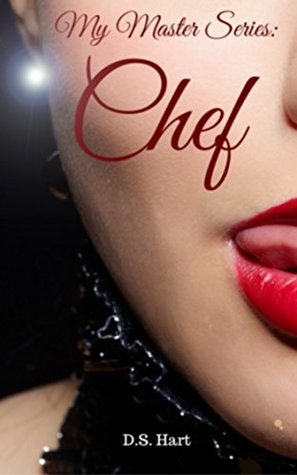 *I was provided a copy of Chef by the author in exchange for an honest review. I am not compensated for my honest opinion.*

Sous Chef Veronica Delaware has the hots for her boss, Head Chef Ethan Craymore. Too bad he’s a complete jerk. Veronica also has some hidden desires she’s not sure Ethan, or anyone else, can fulfill. Her ex-boyfriend certainly couldn’t. No matter where she goes, she can’t seem to escape reminders of her ex.

Ethan learned his lesson about mixing business with pleasure a long time ago, but his desire for Veronica is put to the test when the two are attacked outside the restaurant they work at. Veronica is forced to stay with Ethan, and their desires come to the surface. It appears they’re more compatible than either one thought.

The attack at work and a fire at Veronica’s condo lead them to believe the events are more than just coincidence. When Veronica’s safety is in jeopardy, Ethan will have to use all his resources to save her.

The romance and suspense were also well done. While Veronica and Ethan were getting to know each other sexually, they were also getting to know each other personally. There may have been insta-lust, but there was no insta-love. The love grew at a nice pace throughout the story. The suspense wasn’t apparent at first but developed as the story progressed, leading to a nice climax and tying into the romance at the end.

While I really liked the plot and the characters, the editing errors brought the book down for me. In addition to things like missing and extra words, wrong words, and incorrect dialogue punctuation, there were also several inconsistencies in the plot that made it less enjoyable. Both main characters had contrasting information given at times about their background. A few plot devices were a bit too cliché for my liking. This book could truly benefit from a strong editor to fix these issues.