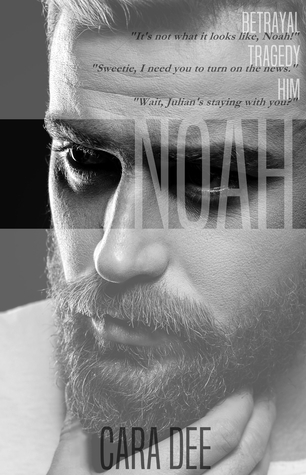 *I was provided a copy of Noah by the author in exchange for an honest review. I am not compensated for my honest opinion.*

In Breaking Free and With Brave Wings we met Noah Collins, Assistant Director and life of the party. Now Noah has his own book, aptly titled Noah, where we pick up several years later when he thinks his life is in order and he’s happily committed to his girlfriend. But Noah’s life gets thrown upside down in a matter of hours when he finds his girlfriend cheating on him and then loses his entire family in a plane crash. If you haven’t read the other two books, no worries because Noah can easily stand on its own.

Julian is Noah’s stepnephew, someone Noah hasn’t had much chance to get to know over the years. He’s also the only person who understands what Noah’s going through considering Julian also lost his family.

Noah and Julian form a bond over their grief and begin to help each other work through their pain. They recognize how their bond could become unhealthy by depending on one another too much, especially when things become sexual. While Noah doesn’t identify himself as gay or even bisexual, he’s never been opposed to same-sex relationships. He’s just never had many relationships at all. The pair need to heal separately before they can explore the attraction between them.

Both Noah and Julian are well-developed characters. We see Julian as shy and timid, yet he excels in music and is able to express himself more freely through his songs. He has deep-seated issues to work through, and even though the book is written in Noah’s point of view, we get a good glimpse of how Julian grows and becomes more assertive throughout his healing.

Noah has always been a take-charge kind of guy and the life of any party. But in his grief over losing his whole family, he becomes lost. Add in what feels like an unnatural attraction to his nephew, and Noah doesn’t know which end is up. He wants to help Julian as much as he can without overstepping any lines, but the closer they get the more his attraction grows. It’s so interesting to watch Noah go through all these changes. And just when things seem to be going well, other issues pop up that the pair have to handle together.

One of the things I love about this story, and all of Cara Dee’s books, is the way the secondary characters are incorporated. While they’re in the background, the writing style allows their personalities to shine through and builds depth to the plot. It’s also great to get a peek at what’s going on in the lives of the characters I loved so much in the previous books.

Another stellar story from Ms. Dee. My other reviews of her books can be found under the Author Spotlight tab.

1 thought on “Noah by Cara Dee”