Drawing Me In (Due South Book 7) by Tracey Alvarez 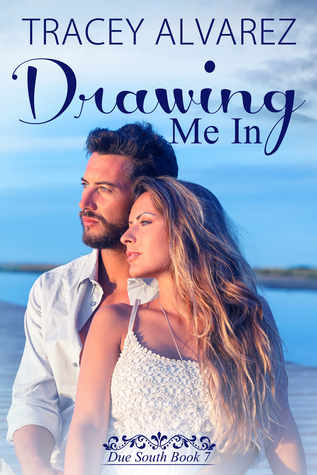 *I was provided an ARC of Drawing Me In by the author in exchange for an honest review. I am not compensated for my honest opinion.*

Drawing Me In is book 7 of the Due South series, and while I typically get bored with a series after a few books, I can emphatically say this one drew me in right away and kept me hooked until the end. I absolutely loved Bree and Harley’s story. It was sweet and seductive yet had enough plot to keep me entertained throughout.

Bree Findlow’s life is all about order and control, right down to keeping her emotions under wraps. She’s had years to practice this skill, starting with tuning out her parents’ fights, then having to pretend she didn’t have deep feelings for Harley Komeke, and later having to give up the most important person in her life. Bree felt like she didn’t have any close friends she could open up to when in reality, she had a whole island of people in her corner.

Harley Komeke made it very clear that he never wanted to get married or have children. He’d rather be alone than end up like his father who abandoned him, his mother, and his twin brother shortly after the twins’ birth. Yet Harley can’t understand why he continually seeks solace in fiery Bree Findlow. Finding out he got her pregnant ten years ago and she gave the baby to her sister to raise is bad enough. But finding out she’s pregnant once again with his child changes everything.

I truly loved both main characters in this second chance romance. Bree has valid reasons for her completely ordered life, and it’s entertaining to see what she’s feeling inside while putting on her mask to cover up any outward emotions. At the same time, her friends show their support and begin breaking down Bree’s walls, allowing her to finally feel she has people she can depend on.

Harley is rugged, sexy, and artistic. He’s Oban’s golden child since he made it big in the New York art scene. His only flaw from a woman’s point of view is his extreme disinterest in commitment. Harley’s got demons of his own that have shaped his view of relationships. One of the most interesting things about this story was how Harley and his twin brother Ford went through the same set of circumstances but each came out the other side with varying scars. It made this book truly different from the last book in the series, which focused on Ford and Holly’s relationship. Throughout this book we see Harley having to confront his past and everything he believed to be true, as well as a reversal of the twins’ roles now that Ford is the relationship expert. And it doesn’t hurt for Harley to have to eat a little crow after all the advice he gave his brother.

While this story easily could have been more of the same, there wasn’t a single boring moment to be found. The intimate scenes were fun but realistic and not overdone. The relationship progressed at a believable pace. And both main characters showed growth while remaining true to their characterizations. Ms. Alvarez is one of a handful of authors I can always count on for a solid plot.