Boundary: The Other Horizons Trilogy (Book 1) by Mary Victoria Johnson 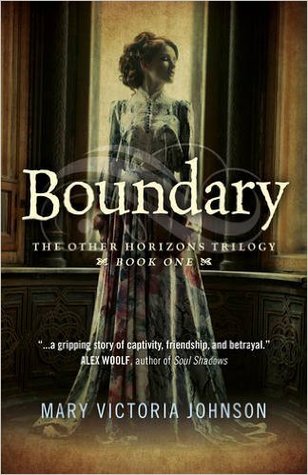 *I was provided a copy of Boundary by the author in exchange for an honest review. I am not compensated for my honest opinion.*

To an outside observer, Penny and her five friends live a life of luxury. They have everything they need provided for them, they live in a mansion, and they can do almost whatever they want within the boundary of that space. But it’s that boundary that makes Penny question everything around her. Touching the invisible wall surrounding the property will fry someone to a crisp, and Penny and her friends are essentially being held hostage inside it. They’re not exactly being held against their will, at least not until Penny begins questioning how they got there and why they can’t leave.

Penny’s curiosity not only angers their already sinister master, but it also begins a series of trials that pit friend against friend because the winner will get to leave the boundary. Alliances are formed and help is provided from unexpected sources, but not everything is as it seems. As the trials become more and more dangerous, it will be every man for him or herself.

Boundary is book one of the young adult The Other Horizons Trilogy, and although it is a standalone book, it does set the stage for the next book in the series. It is full of action and adventure, mystery, and fantasy, as well as being historical. This made for quite an interesting combination.

Although the story felt slow-moving at first, there was always the feeling that something more was under the surface. I immediately wanted to read on to find out why Penny and her friends were not able to leave the boundary. Even the somewhat mundane parts showing everyday life at the manor kept me involved and turning pages. The author did a good job of including small details that played into the plot in a larger way.

Overall this was a great book that I enjoyed reading, however I was left confused by some issues at the end. I’d be giving away too much of the story to go into detail, so suffice it to say these were not the type of issues that will be resolved in the next book; rather, they were the type that were resolved within this book but either done too quickly or without enough explanation for me. Still, I appreciated the journey and would be likely to read more by this author.