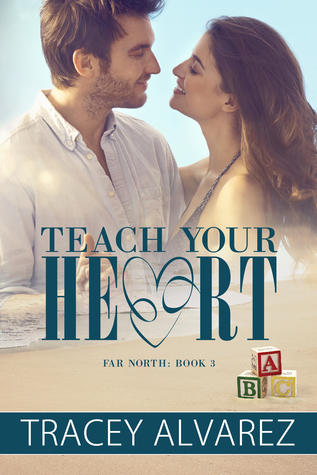 *I was provided a copy of Teach Your Heart by the author in exchange for an honest review. I am not compensated for my honest opinion.*

Gracie Cooper has been wandering Europe since her mother’s death four years ago, but now it’s time to return home to New Zealand. That, unfortunately, means once again being under her father’s microscope and having him point out all the ways her life has fallen short of his expectations. Gracie needs a job, because she’s still got plenty of student debt to pay back, but also to fund her next adventure—far away from her father in the United States.

Dr. Owen Bennett is so focused on his career since the death of his sister that he essentially lives a solitary life even when surrounded by people. That will all have to change when his nieces and nephew come to stay with him for a few months while his mother—their guardian—recovers her own health.

It’s serendipity when Gracie runs into the misfit kids. They need a nanny; she needs a job. Everyone’s happy. Except this darn attraction zipping through her every time she sees her new employer could be a problem. He’s so far from her type. She doesn’t stay put long enough to have relationships. How in the world could this ever work? Maybe some lessons need to be learned the hard way.

Teach Your Heart is book 3 in the Far North series but is completely standalone. If you’ve read the first two, you’ll enjoy the updates on the characters from those books, but you won’t be missing any pertinent information if you start with book 3. As usual, Ms. Alvarez has created a believable, well-paced romance that encompasses more than just the relationship of the main characters. One of the reasons I continue to come back to her stories is because I can always depend on their being something more, something that gives the story and the characters depth.

In this book, both main characters had family issues to solve. While they were somewhat predictable issues, in no way was the growth of the characters predictable or boring. Even when I could feel how things were going to play out, I still couldn’t put the book down because I wanted to see it and get the emotions that went with it.

Owen Bennett had immersed himself in work at the hospital, so when his parents could no longer care for his orphaned nieces and nephew and he was nominated for the job, things became complete chaos. He wanted to do right by his sister’s kids, but the situation was only temporary so how could he make life decisions for them, and especially decisions he knew went against her wishes? With little nudges in the right direction from Gracie, his new nanny who had a free spirit like his sister, Owen began to understand there were more important things than his job, and loving these three kids wasn’t temporary, nor was loving Gracie.

Gracie Cooper was restless and didn’t plan on returning home for long, mostly to stay off the radar of her overbearing father. Finding the nanny job with Owen’s kids would allow her to pay back her student loans and still have travelling money. She didn’t bank on making friends, finding a career she actually enjoyed, loving those crazy kids, and of course loving her boss.

Combined with the enjoyable pace of the relationship and growth of the characters was a nice dose of humor. I loved the kids and all their antics, as well as Owen’s rules and how they changed throughout the story.

Another abundantly entertaining read from Ms. Alvarez. I will continue to read more books in this series. All of my reviews of her work can be found under the Author Spotlight tab.