My Lady, My Spy (Secrets and Seduction Book 4) by Sheridan Jeane 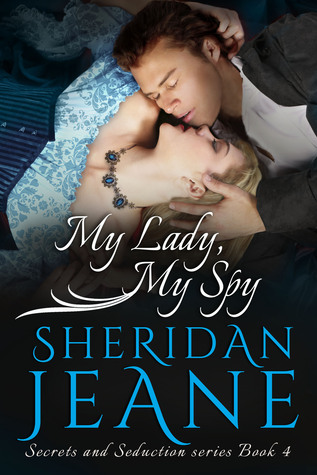 *I was provided a copy of My Lady, My Spy by the author in exchange for an honest review. I am not compensated for my honest opinion.*

Lady Josephine Harrington thought she’d found the perfect man, until she catches Frederick in lie after lie. As a widow, Josephine has no time for lies. Yet she’s drawn to Frederick despite the fact she knows he’s a spy and will frequently be unable to tell her the truth. When Frederick’s mission goes all wrong and Josephine steps in to help him, perhaps this unlikely couple will find a way to make their relationship work.

My Lady, My Spy is book 4 in the Secrets and Seductions series. It is a well-written historical romance with some action in the form of a spy mission taking place. Each piece was compelling in its own right, however the whole of the story left me wanting.

Since this book was received as a complimentary copy in exchange for an honest review, I was told that it was a standalone story within the series as I had not read the previous books in the series. This was unfortunately the first issue I ran into. The story jumped right into the action. The main characters’ relationship was already established at the start, as was the spy mission. This left me confused and trying to piece together what was actually going on in the mission and how Frederick came to have his hands burned.

A lot of the story focused on each of the main characters thinking about how they felt about the other without so much interaction between them. I would have preferred to have more meat to the story showing their interactions instead of narration about their feelings. Because of so much narration, the spy mission didn’t factor very prominently into the story.

Overall, I can see how this story would be enjoyable as part of the series and the writing was well-done for what it was, but it lacked fulfillment as a standalone book. If you’ve read the previous books in this series you’d most likely enjoy this one more than I did.