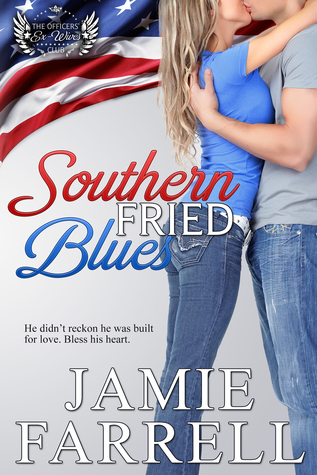 *I was gifted a copy of Southern Fried Blues by the author. I am not compensated for my honest opinion.*

When her husband divorces her out of the blue, Anna Martin finds herself a thousand miles from home in a job she doesn’t love and lacking the education she was never able to complete. She’s uprooted her life too many times for a military man, and vows to never do it again. But finding herself and figuring out what she really wants in life might be pushing her toward a sexy man in a uniform after all.

Jackson Davis is a Southern gentleman through and through. Despite his jokes about his mama, it was really his daddy who taught him everything he knows about being a gentleman. And if the best man he’s ever known couldn’t keep a woman happy, Jackson doesn’t hold out much hope for himself. Yet there’s something about Anna Grace that makes him want to try.

Any relationship between Anna and Jackson comes with an expiration date—deployment—so it should be safe for them to spend some time together while they have the chance. But when their hearts get involved, things could get ugly.

Southern Fried Blues is book 1 in The Officers’ Ex-Wives Club series and it can comfortably be read as a standalone. This witty contemporary romance is full of Southern slang and banter that kept me amused throughout the entire story. Jackson had a habit of playing the dumb redneck when he didn’t want to show his true colors. Thankfully, his Anna Grace saw the man underneath and called him on it every time.

The characterizations of the main characters were interesting and consistent. Anna was a Yankee with OCD tendencies. She loved her label maker more than anything else, and organization was her life. Jackson’s appreciation for her idiosyncrasies made their relationship that much more solid. He watched her sort her potato chips, figured out which pile contained her favorites, and then offered his up just to make her happy.

This book didn’t lack secondary characters, and they were all well-developed and entertaining, keeping the story interesting on all levels. I thoroughly enjoyed this entire book and would definitely read more by this author.