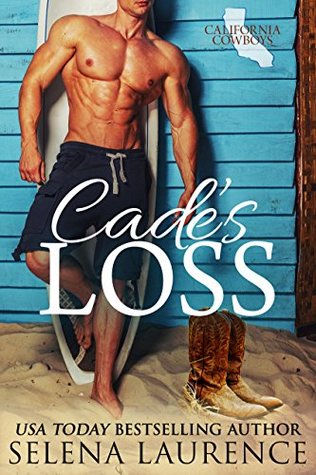 *I was provided a copy of Cade’s Loss by the author in exchange for an honest review. I am not compensated for my honest opinion.*

Cade Jenkins had to give up his whole life at only twenty-five years old. After his parents’ sudden death, he became the guardian of two younger brothers and was responsible for a large California ranch, putting his dreams of a professional surfing championship on hold indefinitely. Years later, he still feels responsible for keeping the ranch running and his brothers in line. When his brothers want to ride the ranch wave of the future—organic ranching—Cade can’t seem to move forward without feeling like he’s forgetting his past.

Organic consultant Nina Cline values her independence just slightly above the environment. She will never again be beholden to a man for her happiness. Meeting Cade in a bar was only a bit of fun for the night, but when he turns up at the ranch as her next client, the sparks begin flying thanks to their opposing outlooks. Cade becomes Nina’s biggest stumbling block. He not only wants to resist every change Nina suggests for the ranch, but she’s also in danger of losing her heart to him.

Cade’s Loss is a remarkable story about family, love, and letting go of the past. It’s a wonderful start to the California Cowboys series, drawing the reader in to the entire Jenkins family even though it’s a standalone book. And what could be sexier than a surfing cowboy with a tortured soul?

Cade’s personality made him easy to love right off the bat. He was a family man through and through, but he’d yet to realize his love for his family had become misguided. He still saw his brothers as needing guidance when they were not only capable of taking care of themselves but also more than qualified to run the ranch.

Nina was a strong woman who had been burned in her career by a man and wasn’t willing to let it happen a second time. Her strong convictions toward herself and the environment made her an endearing character, and her relationship with Cade made her a better person. The relationship between the characters occurred at a natural pace, with plenty of time to actually get to know the other person before falling in love.

The Jenkins brothers were an intriguing family, and I felt connected to the secondary characters and am looking forward to the rest of this series to read more about them.

Other reviews of Ms. Laurence’s books can be found on the Author Spotlight tab.