The Czar (A Standalone Hockey Billionaire Romance) by Selena Laurence 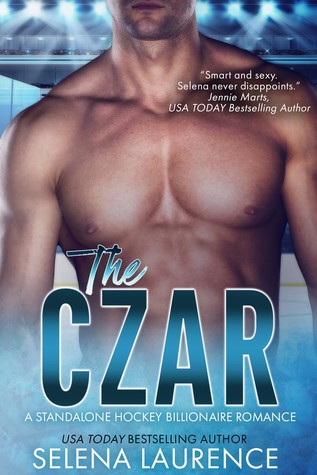 *I was provided a copy of The Czar by the author in exchange for an honest review. I am not compensated for my honest opinion.*

Mick Petrovich’s life has been built around playing professional hockey and enjoying no-strings-attached time with the puck bunnies. When an injury puts him out of hockey for good, it throws everything he’s lived for into turmoil. His father’s pressure to join the family business only makes matters worse. Mick has very personal reasons for wanting to stay as far away from the vodka business as possible.

Solana Werner has just landed her dream job in the marketing department of Petrovich Vodka. She’ll let nothing stand in the way of proving herself in the corporate world, and she may have something to prove in her personal life as well. Her growing attraction to the heir-apparent of Petrovich Vodka, Mick, is dangerous in more ways than she ever imagined. Both Mick and Solana need to figure out what they really want out of life before it’s too late to have it all.

The Czar is a standalone romance from trusted romance author Selena Laurence. Ms. Laurence can always be counted on to deliver a solid plot and well-developed characters, and this book is no exception. Ever the playboy, Mick’s career-ending injury forced him to wake up and take a hard look at his life. From the beginning of the story to the end, Mick worked his way through a life-changing journey to figure out what came next. In addition to the romance between Mick and Solana, Mick also had to choose a new career path and resolve relationship conflicts with his father over the family business.

One of the things that drew me to Mick beyond the sexy hockey player persona was his Russian heritage. It was incorporated into many aspects of the story, from the food to his nickname for Solana, and gave more depth to his character. I also enjoyed reading about Solana’s Hispanic background and how each character respected where the other came from.

The relationship developed at a nice pace with both Solana and Mick having to come to terms with their feelings for each other in their own time. The only minor drawback from this story for me was that the problems in their relationship could have been avoided, but the growth of each character kept me engaged and turning pages.

Overall, it this was another enjoyable book, and I will continue to read Ms. Laurence’s work as I can always count on an appealing story. All of my reviews of Ms. Laurence’s books can be found under the Author Spotlight tab.