One Plus One by Jojo Moyes 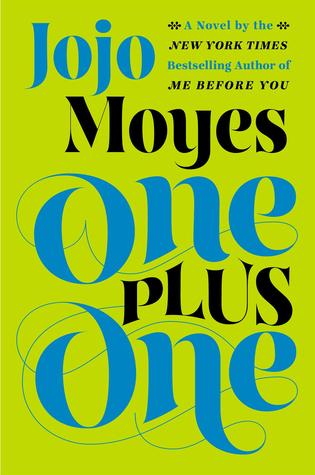 Real people. Real struggles. Very real emotion. Jojo Moyes delivers all of that in spades in the novel One Plus One.

Jess is a single mother. Since her husband left she’s barely making ends meet. Her sixteen-year-old stepson Nicky is being bullied, and her ten-year-old daughter Tanzie is a genius at math. One math competition could allow Tanzie to go to a better school, get a better education, get out of their horrible neighborhood. But without even enough money to get Tanzie to the competition, there’s no hope of getting ahead in this world.

Ed Nicholls may be a rich software developer, but he has problems of his own. He’s facing the possibility of prison for just trying to let a woman down easy. When he crosses paths with Jess and offers to drive her family to the math competition, it should be a simple trip and something to take his mind off his own problems. Falling in love certainly wasn’t on the agenda.

This book caught me up in the lives of its characters and kept me enthralled throughout. One of the most immediate things that drew me in was that the main characters did not even like each other at the start. Jess was “the help.” She cleaned Ed’s house, he didn’t have a clue who she was or what her situation was, and he literally slammed a door in her face. Ed was just another rich guy who didn’t know how good he had it. And once the two got into a car together, they got even more prickly toward each other. Such an awkward situation that had no choice but to turn into some kind of friendship.

The character growth was amazing on all fronts. Jess needed to learn to accept help. Ed needed to realize his situation wasn’t the worst thing out there. But even Nicky and Tanzie had much to learn, and I loved that Nicky and Ed formed a bit of a friendship that allowed Nicky to grow beyond his little neighborhood and find his place in the world.

The reasons for only 4 out of 5 stars were somewhat minor but enough of a drawback for me. Overall, I loved the book and was filled with emotion while reading it. But there were a few inconsistencies in the story, like the dog being in two places at once, which tend to draw me out of the story. The other thing for me was that while Ed was a loveable character as he was written, it wasn’t exactly the way it was depicted in the summary of the book. I expected some more quirks, or that he’d be a little more insecure. He was certainly uninformed about financial matters, but for the most part his character seemed to be fairly confident. He was no pushover with his ex-wife, and never seemed to doubt why women were attracted to him.

This was an enjoyable and emotional journey, and I will definitely read more by this author.