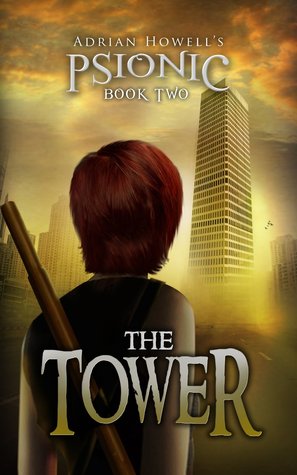 *I was provided a copy of The Tower by the author in exchange for an honest review. I am not compensated for my honest opinion.*

At thirteen, Adrian Howell has already lived a full life as a wild-born telekinetic. He’s happy to be settling down in the heart of the new psionic city of New Haven. He freely joins the Guardians, hoping they’ll be able to help him rescue his sister from the Angels. But life as a Guardian means intense combat training of more than his telekinetic powers.

Terry is Adrian’s combat trainer, and she also becomes a friend—something Adrian doesn’t have many of. But the rigorous training makes Adrian uncomfortable. He has no interest in shooting a gun or being able to kill someone with his hands. Even more uncomfortable are his recurring nightmares, indicating something hiding inside his mind. Adrian will have to unlock his own secrets before someone he cares about gets hurt.

The Tower is book two in the Psionic Pentalogy series, and it starts right where book one left off. It’s a thrilling addition to the series, continuing on Adrian’s journey into the world of psionics as he learns how to use his powers and fights for what he believes in. While the main characters are young, the book deals with some death and killing, as Adrian lives in a world where he doesn’t get to be a regular kid.

Once again, I enjoyed watching Adrian’s struggle to make grown-up decisions when he was still just a kid. The author did a wonderful job of presenting Adrian’s attempt to be a normal thirteen-year-old and handle mature situations at the same time. He had to work through feelings for Terry in a normal young teen way while he was also struggling with his own identity. Adrian didn’t know who he really was, what he was capable of, or what normal was for him. He discovered all of this throughout the story. The addition of dealing with his feelings for Alia, his pseudo-sister, made for a wonderful emotional journey.

The plot was well thought-out, leaving little kernels throughout in a way that really made the reader think about the details. Although I knew who the betrayer was and why they betrayed the Guardians before it was revealed, the author did a good job keeping the suspense going. The story still came to a gripping climax, and it even had more issues to resolve and character growth beyond that.

This book is part of a series and best enjoyed when read in order, but enough background information was provided to be read as a standalone. The story had a satisfying conclusion while still leaving doors open for the next book in the series. I look forward to reading the rest of the series.